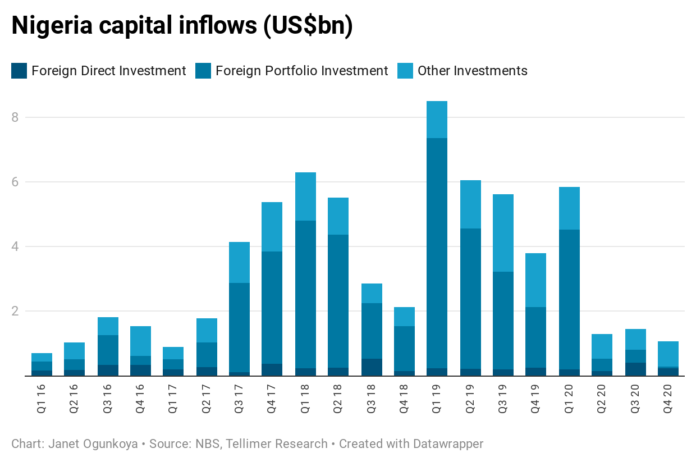 James Emejo writes that both the federal and state governments must take concrete steps to provide the enabling environment to attract and retain foreign investments.

According to current statistics, the total value of capital importation into the country declined by 28.09 per cent to about $1.57 billion in the first quarter of the year (Q1 2022) compared to $2.87 billion in the preceding quarter.

When compared to the corresponding quarter of 2021, capital importation also decreased by 17.46 per cent from $1.91 billion.

National Bureau of Statistics (NBS) further noted in its Capital Importation Report for Q1 2022, that portfolio investment accounted for 60.87 per cent or $957.58 million, the largest amount of capital importation by type.

According to the statistical agency, capital importation by country of origin further showed that the United Kingdom ranked top as the source of capital imported into the country in the first quarter, accounting for $1.02 billion, representing 64.92 per cent of total transactions.

This was followed by the Republic of South Africa and the United States of America valued at $117.50 million or 7.47 per cent and $82.07 million or 5.22 per cent respectively.

However, THISDAY’s analysis of the report further indicated that only six states of the federation including the Federal Capital Territory (FCT) were able to attract foreign investments to their respective jurisdictions.

The report came amidst a disturbing trend for the country’s economic managers as investment announcements and actual investments had been on the decline in recent times, partly owing to the unfavourable investment climate, which serves as a major disincentive for investors.

The Nigerian Investment Promotion Commission (NIPC) which had been tracking investment interests in the country in recent times had indicated that investments worth $2.58 billion was announced in 33 projects across five states of the federation including the Federal Capital Territory (FCT) in Q1 2022.

However, some of these investments interest have often failed to materialize for a number of reasons, which should be of concern to the government.

Yet, the government agencies and politicians fritter so many resources on foreign trips allegedly to woo investors and are unfortunately unable to provide the enabling environment for them to set up whenever they indicate interest in the economy.

According to the NIPC, between January and March 2022, about $2.58 billion in investment announcements were recorded in the country.

Although, these investment announcements are not actual investments, they provide a trajectory of potential investment activities in the country if properly followed up.

Apart from the issue of investment announcements not coming to fruition, investors’ interest in the economy had also plummeted in recent times.

Amidst the rising unemployment rate at 33.3 per cent, foreign capital injection to boost job creation had become inevitable to stimulate the economy.  Unfortunately, the investment announcements tracked by the NIPC are more of a wish list, with no immediate impact.

However, analysts have attributed the challenges in attracting foreign capital inflows to the prevailing political uncertainty and insecurity in the country as well as the fact that the country is in an election year.

They also blamed it on the foreign exchange scarcity and unnecessary bureaucracy even though there had been concerted efforts by the government in recent times to improve the ease of doing business.

Speaking on the development in separate interviews with THISDAY, the analysts also proffered some solutions for addressing capital flight in the economy.

He said, “There are reasons why investments are depleting in Nigeria. When investments deplete, capital importation would deplete.

“The political uncertainty is one major reason; prevailing insecurity in the country is another. The deteriorating exchange rate of naira to the dollar remains a bane in the investment climate of our country.

According to the former Director-General of the Abuja Chamber of Commerce and Industry (ACCI), “We need to ensure that that we promote and incentivize export. We need to refine our petroleum products. We need to do everything within our powers to fight insecurity in our land.”

He said, “There is also the bureaucracy in Nigeria that discourages foreign entrants. Although the government has worked hard to improve our ease of doing business rating, we still fall very short in key areas.

On his part, Managing Director/Chief Executive, SD&D Capital Management Limited, Mr. Idakolo Gbolade, said among other things that the government should stop paying lip service to insecurity and tackle it headlong.

He added that corruption remained a major setback that should be addressed with adequate legislation, pointing out that the measure could restore confidence in the foreign investors to start increasing their investment in the country.

Gbolade said, “The year 2022 is a pre-election year and most foreign investors will adopt the wait and see attitude to await the policy direction of the incoming government.

“The federal government has failed to tame insecurity which is a major consideration by foreign investors who always wants to ensure the safety of their investment.”

According to him, “The CBN incoherent policy on FX due to scarcity of foreign currencies is a major setback for capital importation this year; although the new increase in MPR from 11.5 per cent to 13 per cent by the CBN could encourage more investment in the nearest future but this also depends on the stability of the government.

“The Federal government should ensure policy consistency and encourage more activities in the local economy by stimulating the manufacturing, agricultural and mining sectors.”

Also, an Associate Professor of Agricultural Economics at the University of Port Harcourt, Anthony Onoja, argued that the Nigerian government had not done enough to build an environment that is capable of attracting FDIs.

He said the dwindling capital inflows remained worrisome, especially at a time when the country needs to consolidate on the momentum of economic recovery and growth after surviving the recession engendered by the pandemic in 2020.

According to him, the rising wave of insecurity and conflicts across the country, which is heightening by preparations for the coming elections next year, further puts potential investors on red alert.

Onoja said the fears of foreign investors is exacerbated by uncertainties surrounding who the next president of the country will be and what policy thrust for stable macroeconomic management can be expected from the next president.

“When economic growth rate retards it will consequently weaken aggregate demand with this has a possible negative impact on business performance.

“The rising trend of inflation in the country which affects almost all commodities in the country, plus general yearning for improved wages to meet up with the growing cost of living by workers have the potential of increasing the cost of doing business, especially cost of labour.”

“Exchange rate stability should also be improved while small and medium scale industries should be encouraged to increase their productive capacities by providing them with the right mix of macroeconomic policies (e.g credit and affordable interest rates).

“While we cannot say that the governments should not spend on elections, the government at both state and federal levels should not lose focus on building and maintaining the nation’s public infrastructure that can help industrial growth and development,” he said.